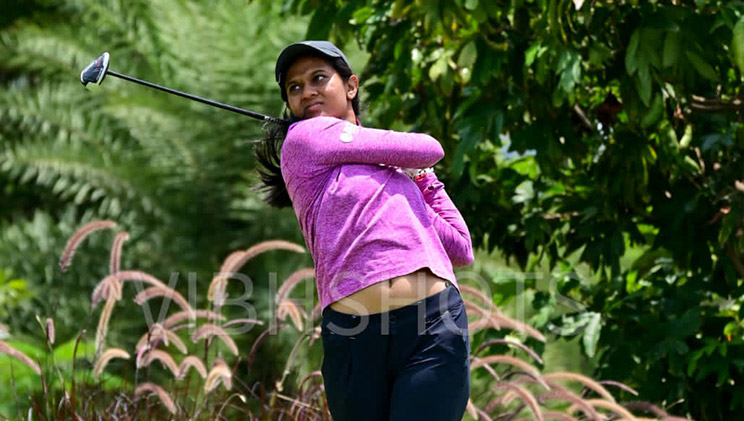 Back from injury, Pranavi shoots 6-under to lead by 8 shots in 7th leg of Hero WPGT

Bengaluru, June 9:Pranavi Urs seems to be wanting to make up for the time she has lost due to injury. The 18-year-old Mysore golfer, who has two wins this season, went one better than the first round as she added six-under 66 to her first round card of 5-under 67.

Her cards of 67-66 with 15 birdies against two birdies and a double, indicated that she has fully recovered from the muscle tear that forced her to withdraw in the first round of the trials for the Asian Games, which have now been postponed to next year. A year earlier, she had a wrist injury that forced to her take time off from golf.

Leading Jahanvi Bakshi by five shots after the first round, Pranavi birdied third and ninth on the front nine of the Prestige Golfshire course and turned in 2-under, as Jahanvi had two birdies and a bogey. On the back nine, Pranavi dropped her only shot on the Par-4 12th, but then in the next six holes she found five birdies including four on the trot from 15th to 18th for a superb 66. With 11-under 133 Pranavi is now eight shots ahead of Jahanvi, who had two more birdies on the back nine for a 69, which was the second best card of the day along with that of amateur Heena Kang (77-69). Jahanvi Bakshi is 3-under 141 with 72-69.

Asmitha Sathish, who shot the first day’s second best score of 70, was even par in the second round with two bogeys, both on Par-5s, and two birdie on Par-4 8th and Par-3 17th. Asmitha was third, nine shots behind Pranavi.

As 24 players made the cut, which fell at 155, Lakhmehar Pardesi, Anaggha Venkatesh, Rhea Purvi Saravanan, Agrima Manral and Marshneil Prasad missed the cut. Suchitra Ramesh withdrew due to medical reasons.

Tee times for the third and final round of the 7th leg of the Hero Women's Pro Golf Tour 2022 at Prestige Golfshire, Bengaluru

Copyright © WGAI. All rights reserved.
Design and Developed by Satoop-Media