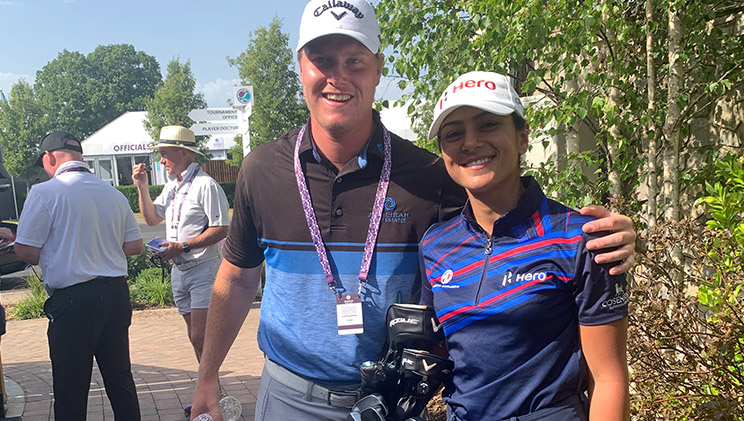 London, June 18:Tvesa Malik seemed set for an early exit as she had a disastrous start at 6-over through her first seven holes in the second round. Yet, as she later said, she was very angry but refused to give up, right up to the 18th, which she birdied for the second day running with a tense eight footer. That paid off as she made the cut on the line after waiting till almost the very end of the evening to know that.

“We live to fight to another day,” she said with a laugh. “I was so angry with myself, but I just did not want to give up. After being 6-over for first seven, three birdies on back nine against two bogeys meant I had a chance to squeeze in.”

Tvesa missed at least three birdies inside eight feet, the distance she negotiated for her final crucial putt on 18th. With 78 in the second to follow up on her first round 74. At 6-over she was Tied-59th as 62 players made the cut.

The other Indian in the field, Diksha Dagar missed out with 78-80.

England’s Hayley Davis forged ahead with a two-shot lead heading into the final round after carding a round of 68 (-5) to be nine-under-par. She had an opening 69 (-4). In the second round Davis rolled in seven birdies and two bogeys to be two shots ahead of compatriot Bronte Law (68-71).

“Nothing worked for me for most part of the day,” said Tvesa, who has been playing well in patches this season, but not been able to put together a good tournament. “But I decided I would give it a shot. Things changed slightly after the first seven holes. The two pars gave me some breathing space. I was not driving well, not putting well.

“On the back nine I birdied 10th and 13th but in dropped shots on 11 and 12. It was frustrating. The wind was up and things not working. I had four pars, which should have had at least one birdie and on the 18th, where I had a birdie first day, I got to the fringe in two and even though it was not a great chip I had eight feet for birdie and it dropped.”

Then it was a long wait till almost the end of the round that she found herself with a place to play the final round, which has Top-60 and ties.

Behind leader Hayley Davis was second placed Bronte Law who after second round of 71 (-2) moved to 7-under with her first round 68.

In the two-day team competition, Team Pelaez, of which Diksha was a part, finished Tied-sixth, while Team Tvesa Malik was tied 27th.

There was a tie for the team event as Team Wikstrom made up of Ursula Wikstrom, Julia Engström, Maria Hernandez and amateur Laurent Dhaeyer –set the early pace added 14-under to their first day 13-under to get to 27-under. Team Garcia with Nicole Garcia, Kelly Whaley, Madelene Stavnar and amateur Mia Baker also had similar scores.

With both teams level on 27-under-par, they will playoff for victory at the conclusion of the third round tomorrow afternoon.

Team Hillier, with Whitney Hillier, Krista Bakker, Lisa Pettersson and amateur James Carson Heard, finished in third place on 26-under-par having produced a round of -14 on Friday.

Copyright © WGAI. All rights reserved.
Design and Developed by Satoop-Media